In the beginning, the bank was a dream in the minds of several Topeka businessmen. The group was responsible for the development of a new shopping center and to complete the shopping experience they wanted to include a bank in the same area.

Progress was slow until Emery Fager was persuaded to leave his position with the Kansas State Bank at Overbrook, KS and come to Topeka to become President and Chief Executive Officer of the proposed Commerce State Bank. Emery Fager accepted the offer and immediately became involved in the organization of the new bank.

The bank was opened December 3, 1959, with a capital stock of $200,000, a surplus of $100,000 and undivided profits of $50,000. According to Fager, “Starting a new bank was indeed a challenge. I wanted this new bank to have a good image, character and a purpose. I did not want it to be just another bank. I dreamed the Commerce State Bank would be progressive, innovative and highly competitive. From the very beginning, we were a people-oriented bank - our philosophy was to serve the needs of all the people with the utmost convenience and with special emphasis on friendly, helpful, personal attention.”

Over the next five decades, Commerce built an impressive list of customer service “firsts” - all based around the core philosophy of providing outstanding banking convenience. These included:

The bank grew to be the largest in the area and in 1995 was nationally recognized as the “Best Bank in Kansas” by Money Magazine.

Over the years, loyal customers in nearby communities throughout the region wanted Commerce’s exceptional service. Demand grew for further geographic expansion. However, growth was stymied because another area bank was already using the “Commerce” name. To continue growth and service objectives, an “expansion identity” was needed, and, the CoreFirst Bank & Trust brand was born.

Convenience is our core and YOU come first! 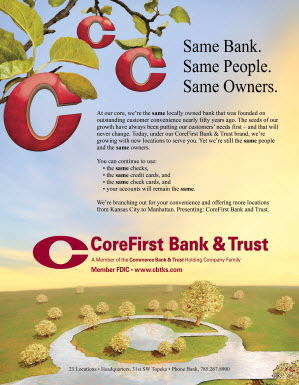 CoreFirst has locations in Topeka and Denver, CO. Locations have also been added in the Kansas City area: Olathe, Shawnee and Lenexa.

Helping our customers with all their financial needs and leading the way in innovation and responsiveness remains at the core of our mission. This way of doing business, the CoreFirst Way, sets us apart from our competitors and will guide CoreFirst well into the future. 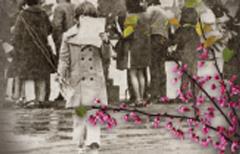 From the very beginning, CoreFirst was a people-oriented bank, supplying over 12,000 redbud trees to Topeka after the devastating 66' tornado. Today, we still have a deep commitment to the communities we serve. 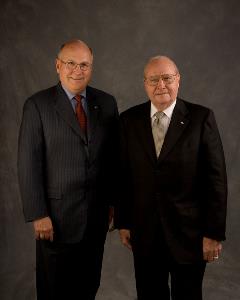 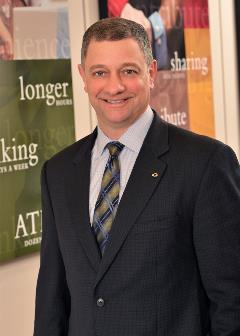